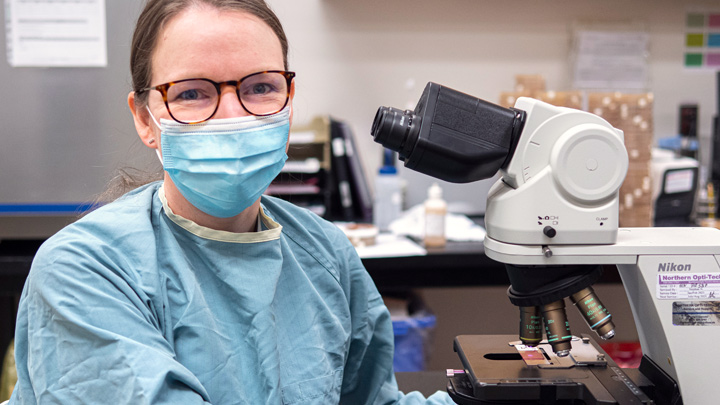 Dr. Tanis Dingle, APL’s lead clinical microbiologist for fungal diseases and an assistant professor in the U of A’s Faculty of Medicine & Dentistry. 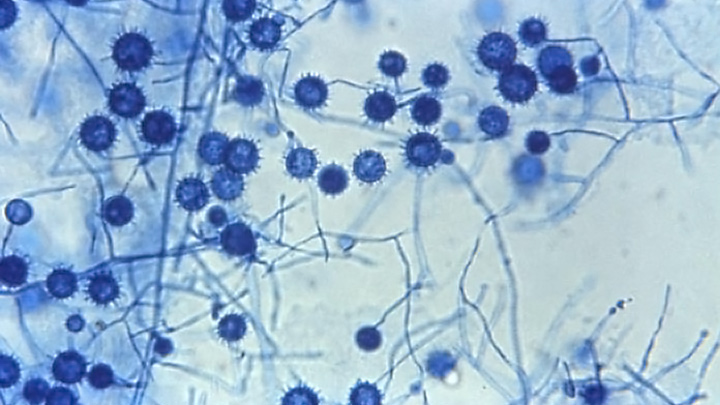 Histoplasmosis – a fungal infection transmitted through bat and bird droppings.

EDMONTON – A rare pulmonary disease that is linked to bats has made Alberta home, according to new research led by provincial lab scientists.

Infectious disease experts at Alberta Precision Laboratories (APL) and the University of Alberta have confirmed that histoplasmosis – a fungal infection transmitted through bat and bird droppings – is now found in Alberta. Their study extends the known range of the disease much further northwest from its traditional home in the central United States and parts of southern Ontario and Quebec.

“We were surprised at how many cases were locally acquired, as histoplasmosis has always been considered a travel-related infection,” said Dr. Tanis Dingle, APL’s lead clinical microbiologist for fungal diseases and an assistant professor in the U of A’s Faculty of Medicine & Dentistry. “We now know that it is definitely living in Alberta and has the potential to infect people who come in contact with it.”

The fungus can be present in contaminated dust particles, and when inhaled, patients experience respiratory infections with flu-like symptoms, including cough, fever, chills and headache. Cases are typically related to individuals who have come in contact with bat or bird droppings in old homes, churches, construction sites and parks.

Among 45 confirmed cases of histoplasmosis in Alberta between 2011 and 2018, the researchers used epidemiologic data and genetic analysis to determine that 15 of the cases were locally-acquired. The cases were primarily found in rural areas in central Alberta including Sundre, Stettler and county, Stony Plain and Spruce Grove. Previously, the geographic range of the fungus was not thought to expand further northwest than Minnesota, some 2000 km away. The results of the study were published this month in the medical journal The Lancet Microbe. In addition, early looks at the study led scientists at the US Centers for Disease Control and Prevention to include the region in newly drawn maps of areas where the disease is known to occur.

“Knowing that histoplasmosis is here can help improve the diagnosis and treatment of patients who have no history of travel to the traditional risk areas,” said Dr. Ilan Schwartz, assistant professor, division of infectious diseases, U of A. “Histoplasmosis can be a challenging disease to diagnosis and to treat, and patients often spend months before the correct diagnosis is made. Awareness that the disease is here is an essential first step for doctors to be able to consider the diagnosis and order the appropriate tests.”

The researchers are also exploring whether climate change could be a factor in the spread of histoplasmosis to new geographies. In Alberta, increasing temperatures and decreasing precipitation have been documented over the past several decades, which might have resulted in more favorable conditions for Histoplasma to live in Alberta soils. The disease can survive in soil temperatures ranging from −18°C to 37°C, the lower end of this range being common in Alberta winters.

The research team hopes to continue their work by further investigating soil samples to determine other areas in Alberta where the disease may be present.

The Faculty of Medicine & Dentistry at the University of Alberta is a leader in educating and training exceptional practitioners and researchers of the highest international standards. The faculty’s mission is to advance health through excellence in teaching, research and patient care. It is home to one of the top 100 ranked medical schools in the world. For more information, please visit www.ualberta.ca/medicine.