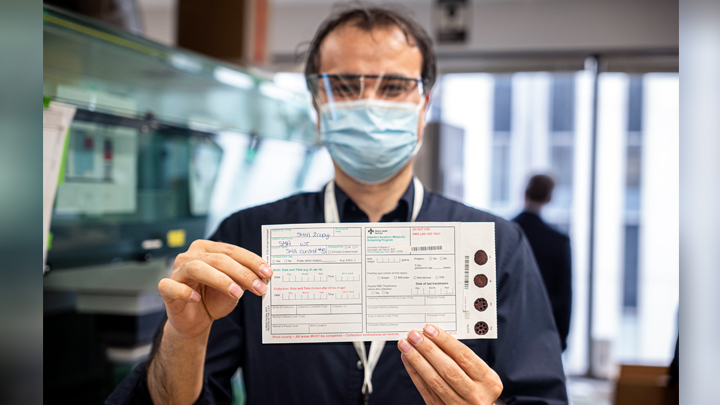 Using droplets of blood taken from newborns, Dr. Farshad Niri screens for spinal muscular atrophy (SMA), a rare neuromuscular condition that weakens muscles by affecting the motor nerve cells in the spinal cord. It’s part of the part of the Alberta Newborn Metabolic Screening Program, a partnership between Alberta Precision Laboratories, Alberta Health Services and the Government of Alberta that screens the province’s newborns for 22 serious but treatable conditions.

Within a few days of birth, babies in Alberta undergo their first lab test, starting with a simple procedure that could dramatically change the course of their lives.

A tiny prick to the heels of their feet yields a few drops of blood that’s smeared onto special filter paper and sent to Alberta Precision Laboratories’ newborn screening lab in Edmonton.

There, expert technologists and genetic scientists conduct an array of tests on every one of the more than 200 blood samples that arrive each day — searching the genetic code of each newborn for rare inherited disorders, many of which are fatal if they are not diagnosed and treated in this earliest stage of life.

“Getting up and coming to work each day is filled with such purpose, knowing we are helping to save lives,” says Dr. Dennis Bulman, APL’s medical-scientific director of genetics and genomics. “Newborn screening tests are always our top priority because we know that time is of the essence when it comes to starting treatment for these conditions.”

Bulman’s team is part of the Alberta Newborn Metabolic Screening Program, a partnership between APL, Alberta Health Services (AHS) and the Government of Alberta that screens the province’s newborns for 22 serious but treatable conditions.

Newborn screening in Alberta started in 1967 with just one condition, Phenylketonuria, or PKU for short.

“This rare inherited disorder causes phenylalanine, an amino acid, to build up to levels that are toxic to the brain and nervous system,” says Dr. Ross Ridsdale, clinical scientist of biochemical genetics. “Clinical laboratory geneticists and pathologists in Alberta have come a long way since then, and screening has evolved dramatically thanks to the advances in technology and genetic analysis.

“In the 60 years since the first condition was screened, our diverse group of lab scientists have pivoted time and time again to assess, analyze, research and apply stringent quality processes and procedures to improve the testing process.”

Dr. Ridsdale adds: “Everyone on the team is crucial to the screening program. A lot of credit goes to the lab techs who do the assay testing behind the scenes, as the integrity of inputting data relies on the accurate and stringent testing of samples so the biochemical geneticists can flag which patients might have a disorder, which really gives them a second chance at life.”

The latest addition to the newborn screening program is spinal muscular atrophy (SMA), a rare neuromuscular condition that weakens muscles by affecting the motor nerve cells in the spinal cord. SMA is a genetic motor neuron (MN) degenerative disease and is the leading genetic cause of infant mortality, but its effects can be dramatically reduced through treatment if it’s caught before symptoms appear in infants.

Screening for SMA began on Feb. 28 thanks to funding from Muscular Dystrophy Canada for a one-year pilot program, after which SMA screening will become part of the publicly-funded newborn screening program.

Alberta is the second province in Canada to begin screening all newborns for SMA so they can be treated earlier and more effectively.

“My family and I are so grateful to the Alberta Children’s Hospital and to Muscular Dystrophy Canada and all the people who rallied with us to get where we are now,” says Jessica Janzen Olstad, whose infant son Lewiston was lost to SMA in 2016.

“Back then, there was no screen test for babies with SMA, nor did we know a lot about treatment. For Lewiston, it was too late, but I thought to myself, ‘we could either let this swallow us whole, or put grief into action, and be part of the solution’.”

The Calgary family launched the Love for Lewiston Foundation to advocate for improved diagnosis and treatment of SMA. The foundation has raised more than $1.3 million towards the cause — and helped bring the pilot to life alongside The Alberta Children’s Hospital Foundation, Dr. Jean Mah Lewiston's Pediatric Neurologist, Alberta Health, and medical staff from AHS and APL.

“Our highly-skilled experts in genetics and genomics spent the last year developing, testing and validating this work which will hopefully pave the way for others across our country to follow in our steps and add SMA to their list of conditions to screen,” says Dr. Bulman.

In 2020-21, more than 48,000 newborn babies born in Alberta were screened for 21 conditions. 214 received an abnormal screen result and were referred for diagnostic testing and 57 of these babies were diagnosed and treated for one of the 21 screened conditions.