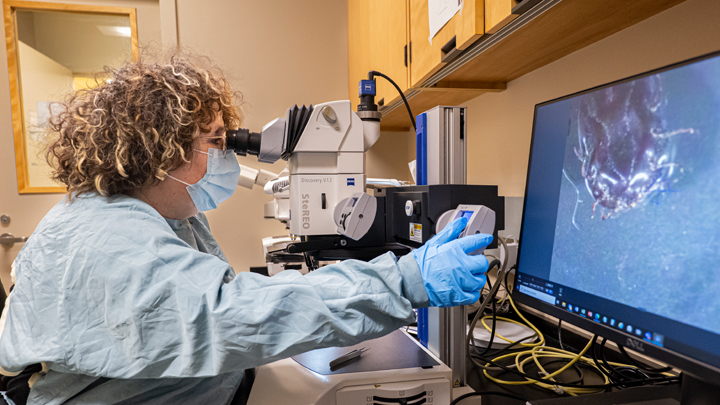 Alberta Precision Laboratories screens hundreds of ticks per month during spring and summer through Alberta’s Submit-a-Tick Program, which relies on voluntary submissions of ticks from Albertans. Photo by Evan Isbister.

Spring is here and microbiologists at Alberta Precision Laboratories (APL) are getting busy analyzing ticks found in Alberta for the presence of Lyme disease in the province.

APL screens hundreds of ticks per month during spring and summer through Alberta’s Submit-a-Tick Program, which relies on voluntary submissions of ticks from Albertans.

“We screen for ticks year-round, and we test select tick species for Lyme disease, which are mostly collected off companion animals and from the environment, but rarely from humans,” says Kinga Kowalewska-Grochowska, a medical microbiologist with APL’s Provincial Laboratory for Public Health and associate professor in the Department of Medical Microbiology and Immunology at University of Alberta.

“Ticks infected with Lyme disease are not yet shown to be common in Alberta and the human cases detected have been acquired outside of the province.”

Dr. Kevin Fonseca, a clinical virologist with APL and Adjunct Associate Professor at the University of Calgary, says there is a small chance of being exposed to Lyme disease if bitten by an infected tick.

“Lyme disease is a serious illness; however, it can be successfully treated,” says Dr. Fonseca.

Alberta is home to many species of ticks but most tick species in Alberta do not carry Borrelia burgdorferi, the bacteria that can cause Lyme disease in people. However, there is evidence that tick species capable of carrying the bacteria are expanding their range in Canada.

Between 1991 and 2020, there were 132 human cases of Lyme disease reported to Alberta Health. All were reported as having been acquired while travelling outside of the province in areas where the bacteria causing Lyme disease and the ticks that carry it are known to circulate.

Since the tick-surveillance program began, there has been a steady increase in the number of ticks submitted by people in Alberta. The proportion of ticks testing positive for the Lyme disease bacteria has not increased.

Submit-a-Tick is a surveillance program which helps to monitor the types and distribution of ticks in Alberta, and to assess the risk of acquiring Lyme disease within Alberta.

All tick submissions must first be screened by submitting a photograph of the tick using the eTick app or through the eTick website.

Only ticks that have been requested to be submitted to the lab following photo identification through eTick will be accepted for testing. This ensures the best use of laboratory services.

Submitting a tick to the lab when requested is optional — and collection, shipping instructions, drop-off locations and mailing address are provided on the Tick Testing Request form.

May is Lyme Disease Awareness Month.